Systemic Racism and the Cave Analogy 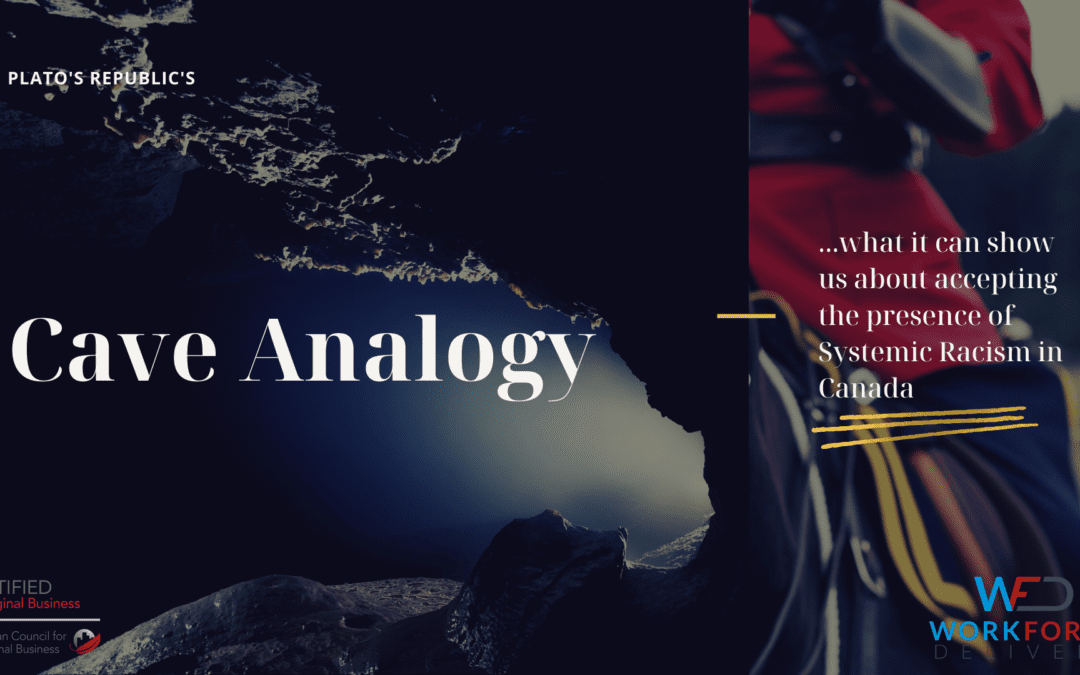 Today we discuss Plato’s cave analogy and systemic racism in Canada. Like many, we in our firm accept that systemic racism exists throughout Canada and is interwoven into our institutions.

This statement comes neither from a place of judgement nor is it presented to suggest castigation of those subject to the system’s influence within which we all reside.

Accepting that many forms of racism are prevalent throughout our society is simply an appreciation of the state of things, without judgement – and from there comes, a choice and a perhaps, hopefully – a commitment.

We write this within weeks of May 25, 2020. During this time, much has been in the news which illuminates the pervasiveness of racism in many forms in our institutions, including within our police forces. The police are no worse or better than most of Canada’s institutions.

Recent events reinforce that responsibility to get it right increases exponentially for those who exercise authority, and at times, force over others.

And as Ibram X Kendi emphasizes in his 2019 book, “How to Be an Antiracist,” getting it right must be viewed, relatively, from where we are at. So, given where we are today, getting it right starts with acknowledging there is a problem. Sadly, for some (but not all) senior leadership positions within police force administration and police member associations, acknowledging that there is a  problem is more than they are willing to offer at the moment. Rather, some choose to deny with vigour.

We intend to explore this denial and anchor our discussion; we will reference Plato’s Cave Analogy in his classic, “Republic.”

In the Cave Analogy, Plato considers three people bound in a seated position in a cave with their heads affixed staring at a wall, for their entire life. Light enters from behind them from the mouth of the cave. From time to time, animals cross the mouth of the cave and cast shadows onto the wall they are facing. The three never knew different, so what they were witnessing on the cave wall, was to them, an accurate reflection of life and reality.

Eventually, the bindings of one of the three came loose. With muscles that had yet been used, the escapee slowly struggled and eventually made way to the cave entrance.

Upon reaching the mouth of the cave, the escapee experienced a great deal of pain. Eyes that knew only darkness and shadow were exposed to the sun’s bright light for the first time. Soon, the eyes adjusted, and the escapee witnessed the wondrous beauty, fullness and the truth of the world.

After exploring, the escapee returned to the cave, wishing to share the freedom and revelation with the escapee’s former cave mates.

Ultimately, the pain of exposure to the light and the pain of accepting the truth was too great for the cave mates. Angrily, they hone in on the escapee, whom they stoned to death for causing them such pain, following which, they returned to their seats in the cave to carry on staring at the shadows on the wall.

Racism, including systemic racism, exists in Canada. Despite this, people continue to choose to deny that fact. We should not be surprised. As the cave analogy shows, holding contempt for information that challenges previously held beliefs is human nature. Such denial is neither right nor necessarily permanent.

And what of the visceral, conditioned emotional responses and attacks that come with such denials? Many in pain seek to destroy. They wish to focus their anger towards someone or something, to stop the exchange of information, and then, they wish to carry on living in their cave- in their distorted reality. They choose to deny the existence of systemic racism.

Each of us must pick a lane for ourselves.

To be racist, that being, “One who is supporting a racist policy through their actions or inaction or expressing a racist idea.” Or, to be antiracist, that being, “One who is supporting an antiracist policy through their action or expressing an antiracist idea.” Objectively, it is impossible to reduce racism without acknowledging that systemic racism exists.

You’ll note that neither choice represents a static position, both choices describe one engaged in action…being static is not an option.

When looked at this way, this is a journey to embark upon and has nothing to do with permanent condemnations. So given recent events, we choose to, in a non-judgemental way in terms of where we are at today, actively seek new information to permit our eyes to adjust, for the alternative is to stay blind and hurt.

Thank you for your time. Subscribe for future updates and you would like to, visit us at www.workforcdelivery.com