Is it better to be loved than feared? Supervision: Performance Management and Psychological Safety 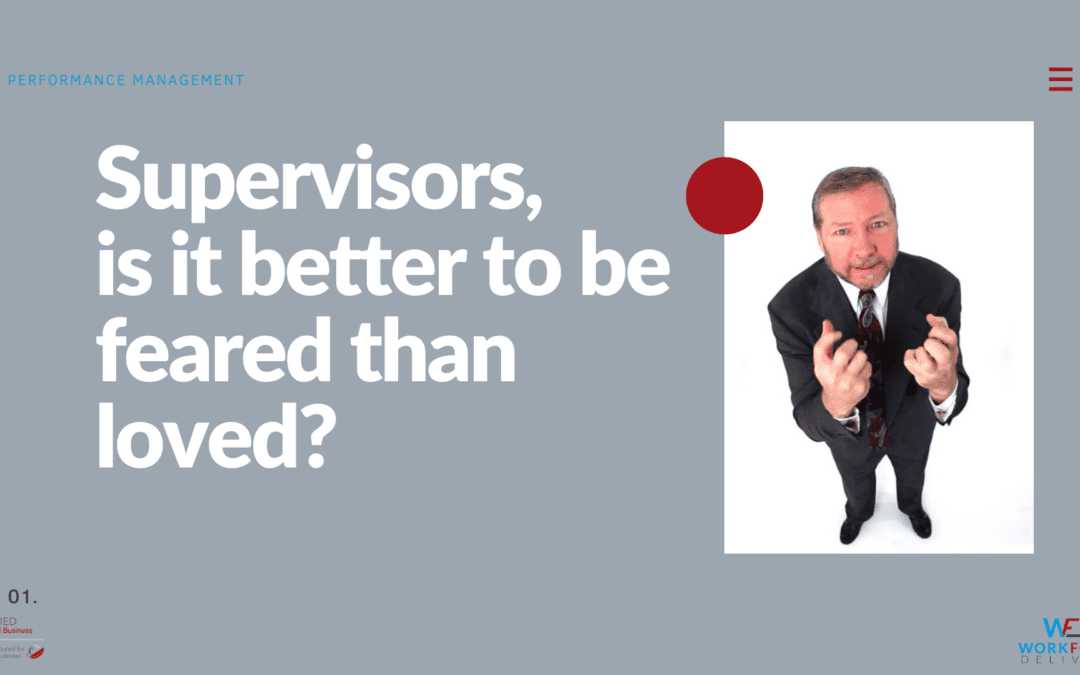 Is it Better to be Feared than Loved?

We have the distinct pleasure of meeting supervisors and managers of every stripe through our work, including those with differing strengths, aptitudes, and experience levels.

Common aspects of the role that many supervisors wrestle with are how to encourage employees to honour the required professional boundaries of the relationship and how to influence employees to afford deference to their position of authority over their team.

Many supervisors go down a path of creating a defensive shell around themselves. This often takes the form of a persona.

This persona is the tool adopted to infuse a stance; a stance machinated specifically to dissuade members of their team from challenging their authority.

That being the goal, there is a conscious decision to create a persona that projects dominance, strength, and, deliberately or not, fear.

In almost every case, such contrived personas are void of a willingness to be authentic and vulnerable with one’s team (something necessary to develop trust).

Under this scheme, assertiveness may be interpreted as aggression. Put more plainly, some supervisors, in playing their part, behave aggressively instead of assertively, whether they intend to or not and whether they even know it.

What happens under these circumstances? When crafting this persona, the supervisor chooses whether it is better to be feared than loved.

Today we revisit this classic question, albeit within the context of performance management, “is it better to be feared than loved.”

Perhaps the most prolifically cited author for the phrase, “it is better to be feared than loved,” is Machiavelli, as cited in “the Prince.”

Before going too far into that specific quote and chapter, we note the Prince, even after all these years, has some measure of controversy among academics. Many question whether that writing is the most accurate account of Machiavelli’s perspectives.

When the Medici family came into power in Florence, Machiavelli lost his position in civil service. Some believe the Prince was, in a sense, a job application in which he was courting members of the Medici family to gain his position back within the bureaucracy. For Machiavelli’s more audacious statements found in the Prince, I tend to take them with a grain of salt – as I believe he was speaking to a more specific audience.

At the beginning of that chapter, Machiavelli starts by saying that leaders must be “considered merciful and not cruel,” and what is often omitted in the quoted statement is the portion that follows after the comma, which changes the meaning of the sentence significantly. The more fulsome quote is, “It is better to be feared than loved if you cannot be both.”,“…if you cannot be both…”.

No, Machiavelli did not give blank-cheque permission to even the most pragmatic supervisors and managers to be cruel towards and feared by their team.

In surveys, employers describe some of the traits most desired in their employees. We do not intend for this list is to be exhaustive. We have reduced it to those behaviours reliant on a certain level of cognitive functioning.

Employers want employees to know their strengths, employees who can think independently, solve problems, be innovative, be proactive, and be willing to learn new things.

Employees put into a workplace that lacks psychological safety are more prone to experience a fight or flight reaction and may enter a state of hyper-vigilance, all of which can impair higher-level cognitive functioning.

We at Workforce Delivery throw out a challenge. Test our own leadership style. Consider whether there are improvements that we could make and decide what and how we might transition towards those improvements. Remember, it is better to be loved than feared by your team. Thank you for your time, and have a safe and enriching day.

For more articles please refer to our home page or our news and knowledge centre.